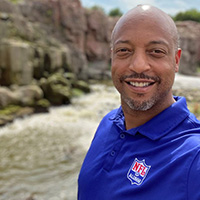 Billy Davis serves as Co-Director of Healthcare Initiatives for the NFL Alumni Association. Since 1996, Billy Davis has been involved in broadcasting co-hosting shows on local Fox channel and his own show for the Dallas Cowboy Weekly in Dallas. He also been a guest on numerous radio and TV shows. Upon retiring he went into the corporate world while still having the burning passion for the game. Billy is a Two-Time Super Bowl winner with both the iconic Dallas Cowboys and Baltimore Ravens. He is one of only twenty players to ever have won a championship in the AFC and NFC. After he retired he entered healthcare and was a high producer as Professional biotech sales for 10 years with Abbvie Pharmaceuticals working in marketing and sales. He recently created a wellness program for current and retired professional athletes and executives for preventative healthcare.

Billy Davis is using his platform to save rural hospitals and create revenue generating services. Billy Davis received the ultimate honor in his home state of Texas. He was appointed as the Honorary Commissioner of Agriculture and the vanguard of the ambassador program for former pro athletes in the state.

Billy was recently nominated as a top 100 Healthcare leaders. He currently is the Director of Marketing for Signature Biologics where he facilitated a contract, the first of its kind, with a major professional sports brand (NFL Alumni).