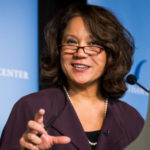 Janet Marchibroda serves as the President of Alliance for Cell Therapy Now, an independent, non-profit organization devoted to advancing the development and delivery of safe and effective cell-based therapies to patients in need.

In addition to her role with the Alliance, she serves as a Fellow for the Bipartisan Policy Center, Senior Advisor and Executive Director for NFL Alumni Health, Board Member for HL7, and Co-Chair of Friends of HL7.

She previously served as Director of the Health Innovation Initiative and Director of the CEO Council on Health and Innovation at the Bipartisan Policy Center (BPC), a non-profit organization formed by former Senate Majority Leaders that combines the best ideas from both parties to drive the development and adoption of principled and politically viable policy. She continues to support the organization as a Fellow. Her work at BPC—which has focused on a wide range of topics, including advancing biomedical innovation, promoting interoperability and information sharing, valued-based payment and new delivery models, employer strategies to improve the health of Americans, patient safety, leveraging real-world data and evidence to support regulatory and payment decision-making, patent policy, and regulatory reform—has resulted in numerous changes in federal law, as well as changes in the private sector.

Marchibroda’s other roles in the private sector have included serving as Chief Health Care Officer for IBM, Senior Vice President for Health Policy and Technology at CNI, and Chief Operating Officer for the National Committee for Quality Assurance, an organization devoted to improving the quality of health care for Americans. She also served as founder and CEO of the eHealth Initiative, a non-profit, multi-stakeholder member organization that was instrumental in advancing legislation that provided nearly $40 billion in investments in health IT. She also served as Executive Director of Connecting for Health—an initiative supported by the Markle Foundation and Robert Wood Johnson Foundation and Chief Operating Officer for the National Coalition for Cancer Survivorship. Marchibroda also co-founded and served as Chief Operating Officer of a healthcare-related electronic publishing, data, and consulting services company which was later acquired by Bertelsmann AG.

Marchibroda has also supported the federal government, leading stakeholder engagement activities for the National Coordinator for Health Information Technology within the Department of Health and Human Services and leading several large-scale projects at the Centers for Disease Control and Prevention (CDC). At CDC she led efforts to both advance interoperability and information sharing between health care providers—through their EHRs—and state and local public health agencies to support vaccination and rapidly deploy on-the-ground epidemiological, clinician outreach, and data analytics support to more than 30 local health departments across the U.S. and territories to support mothers and babies impacted by the Zika crisis.